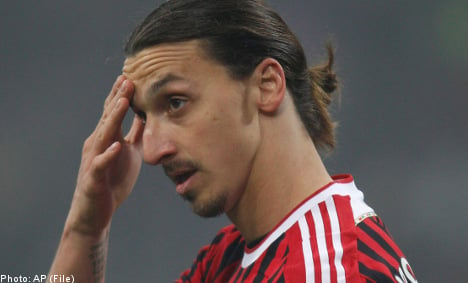 “I made a huge error… It happens, it happens… I must learn from my mistakes,” Ibrahimovic said after the incident.

The volatile 30-year-old – who has scored 15 times this season and lies second in the Serie A scorers list – received the ban for slapping Napoli player Salvatore Aronica in the face during Sunday’s 0-0 draw, for which he was red carded.

Commission. However, Ibrahimovic accepted that he had slipped-up.

“There is no need of video images to prove what I did, I made a mistake.

“But I have confidence in the team, it will be just as good without me.”

‘Ibra’ has a chequered disciplinary record in Italy – last season he was sent off two matches in a row while seven years ago when he was playing for Juventus he missed a title-deciding match with Milan because he was serving a suspension.

He was suspended after headbutting Inter Milan’s combative Serbian Sinisa

Mihajlovic and then hit the latter’s Inter team-mate Ivan Cordoba.