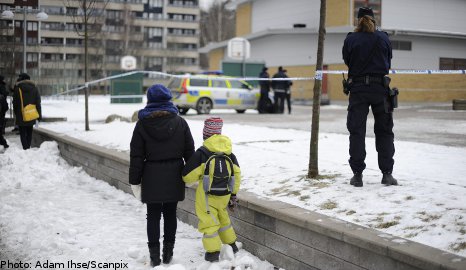 “I saw blood when I came up to her. She said, ‘I think I’ve got a knife in my throat’,” a 9-year-old friend of the victim told the Metro newspaper.

The friend at first thought the 10-year-old had a bloody nose, but soon realized her friend lying on the ground had a knife protruding from her neck.

She then saw a strange man running from the scene.

“He was wearing white trousers and a black leather jacket and had something in his mouth,” the girl told Metro.

The day after the attack, more officers are out on patrol in the neighbourhood near the Bergsgård school where the stabbing took place.

“If for no other reason than to increase the sense of security.”

Edberg refused to say, however, exactly how many additional officers were on patrol in the Hjällbo district.

The stabbing, which took place Monday morning, left the school in shock.

He placed some of the blame on the inadequate security at the school.

“They should have wardens out during recess. It’s too easy to get in here,” he told the paper.

Parent Paulus Esho’s daughter is friends with the victim and she was out in the schoolyard at when the incident took place.

“She’s really scared now. They all gathered in the school afterward and cried,” he told GP.

According to some eyewitness accounts, the girl may have found the knife on the ground and was on her way to turn it in to a teacher when the man come up from behind her.

A police source told the Aftonbladet newspaper that investigators believe the stabbing was the work of a lone, confused man.

One of several leads the police are exploring is a cigarette butt found near the scene which police hope may have DNA evidence.

Following the attack, the girl ended up at Sahlgrenska hospital.

Hospital spokesperson Lena Mattson said that the girl is in stable condition, but refused to provide any more details.

At the school, personnel and police held a joint meeting prior to students’ arrival on Tuesday.

Principal Janne Niklasson explained that school officials hoped that the children would have as normal a school day as possible.

“We’re not making any changes to their schedules,” he told TT.

“What’s important is that students come to school and have the chance to talk to their teachers about what happened.”

Psychologists and other student health personnel will hold talks with the students who were interviewed by police about the stabbing and plans to follow the police investigation closely.

“There was a lot of attention from the media yesterday and that’s not something our students are used to dealing with,” said Niklasson, who added that he hoped members of the press would not come too close to the school, where enrolled students are between six and twelve-years-old.