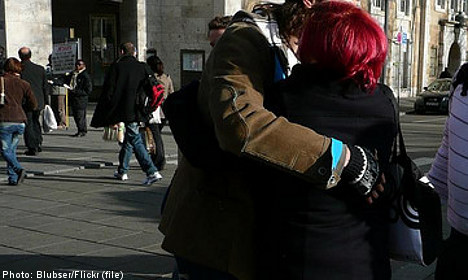 “But in those cases it’s more of an embrace or a pat on the back.”

According to Stockholm police, one of the thieves usually approaches the victim, and without any words of greeting or warning, hugs the victim – sometimes even lifting them off the ground.

Meanwhile, an accomplice who is aware of the location of the victim’s valuables, takes the chance to pinch things from his or her pockets.

More than 20 people have so far been robbed by the gang, which have occurred over the past two weeks, mostly in the central districts of Södermalm and Gamla Stan, according to the Metro newspaper.

Police say that the victims are usually young girls and the missing valuables are mostly wallets and iPhones.

According to police, the attacks have mostly happened at night and the offenders’ details are sketchy.

They are now issuing warnings to residents and visitors to Stockholm to be wary of tactile strangers.

The descriptions of the offenders are varying, and police have concluded that there could be as many as four members in the gang, according to the paper.