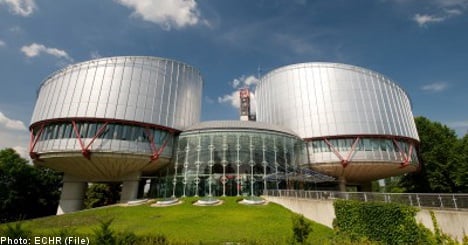 According to the ECHR, finding the leaflets were “unnecessarily offensive” to be protected by free speech laws.

The men, who were aged between 19 and 24 at the time, distributed roughly 100 flyers into student lockers in a school in Söderhamn in eastern Sweden in December 2004.

They were told to leave the premises at the time by school officials.

The flyers contained messages discussing the mens’ views on homosexuality, which they referred to as “deviant sexual proclivity”.

The flyer also stated that homosexuals had “a morally destructive effect on the substance of society” and were responsible for the development of HIV and AIDS.

According to the men, their objective was not to promote hate speech, rather to create a debate concerning the school’s objectivity in their education system.

The men were later accused of promoting hate speech, and the Supreme Court in Sweden convicted them in 2006 of agitating a minority community, stating that the men had given the students no possibility to refuse the flyers by leaving them in the lockers.

They four men then take their case to the European Court of Human Rights in January 2007, arguing the Supreme Court ruling constituted a violation of their freedom of expression.

In a statement released on Thursday, the European Court declared the applicants’ complaint was “inadmissible as being manifestly ill-founded”.

The ECHR also noted that discrimination based on sexual orientation is as serious as those on “race, origin or colour”, and that the flyers had been unnecessarily offensive.

It also stated that the Supreme Court’s sentence was reasonable.