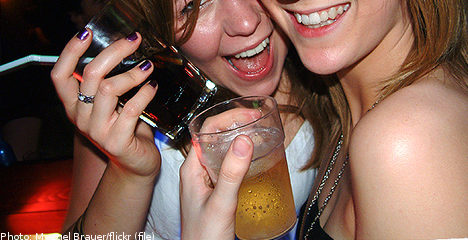 “It is definitely something that is occurring here in Sweden,” said Hanna Kihlander of the national eating disorder support group Anorexia/Bulimia Kontakt (ABK) to The Local.

In many parts of the world “drunkorexia” has become an accepted expression for how the young, and especially young women faced with the demand to drink at night but remain svelte, choose to abstain from eating during the day.

In Sweden, the behaviour has been noted by those who work with sufferers from eating disorders.

According to Kihlander, the practice is probably more widespread than previously believed.

“I think it is fairly common as it is spread over so many different groups with different reasons for why they don’t eat,” said Kihlander.

She thinks that starving oneself in advance to compensate for the calories imbibed at night is common, not only among those who suffer from eating disorders but also by other image conscious young people.

Some of those who choose not to eat are also approaching it from an economic standpoint. It is easier to get drunk with no food in the system.

However, this kind of behaviour means that the body is being forced to deal with poison when it is the least prepared for it.

“It can accelerate both physical and mental decay. What the effects are long term we can only imagine,” said Anders Tengström, expert on addictions from the Karolinska Institutet in Stockholm, to daily Dagens Nyheter.

Young people of today are under enormous pressure to be perceived as successful and attractive, according to Tengström.

“The idea of a successful person is a thin person who is in control of their body and their life. Young people today know that there is calories in alcohol as well. Looking at it that way starving to be able to drink becomes a logical step in dealing with an important issue in their lives,” said Tengström to DN.

At Maria Ungdom, the Stockholm clinic that handles drunkenness and drug use among young people, this is a well known phenomenon.

“We often get young girls here who say that the reason they got so inebriated is that they had eaten so little during the day before drinking. It happens remarkably often but of course they don’t admit to us that they have problems with food,” said Stefan Sparring, specialist at Maria Ungdom, to the paper.

According to the paper, a recent study shows that up to 21 percent of the girls that end up at Maria Ungdom have some sort of eating disorder to start with.

Among the boys, the corresponding figure is 2 percent.

“To us, this so called ‘drunkorexia’ is part of an already existing behaviour, “ said Kihlander to The Local.

“But it is important to remember that this is the name of a behaviour and not a medical diagnosis.”