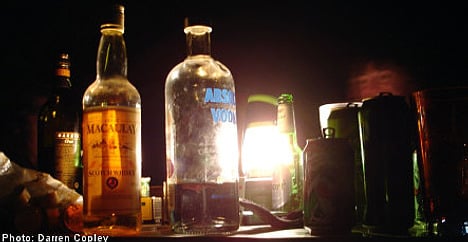 “It’s a huge problem. ‘Vodka-mobile’ is a term all the young people know today,” Marc Gynning of the Stockholm police told the Dagens Nyheter (DN) newspaper.

Gynning explained that kids call or send a text message to dealers who then call back from a mobile phone with a pay-as-you-go card to confirm the order and set up a meeting place.

“In just a few minutes they can sell vodka to ten or fifteen kids who pay cash,” he said.

“Those few times we’ve received tips about an ongoing deal, we never get there in time.”

Police suspect the black-market booze is purchased abroad and smuggled into Sweden.

Popular brands include premium vodka Magic Crystal, as well as cheaper brands such as Rachmaninoff, Jeltzin, Zaranoff and Danzka.

According to Gynning, police first became aware of the “vodka-mobile” last spring and believe the young customers come from all walks of life across Stockholm County.

“We think the contact number has been spread from to few to many, many young people. Vodka is in high demand among youth and the few that we catch have two or three numbers under the name ‘vodka-mobile’ in their phones,” he told DN.

Gynning said more resources are needed in order to put a stop to the “vodka-mobile”, adding he’s concerned about the effects hard alcohol can have on Stockholm’s youth.

“Binge drinking of hard liquor inevitably results in kids becoming drunk and out of control. That in turn increases violent criminality among guys and girls get so drunk that they become easy targets,” he said.

So far, however, the young buyers have been protective of their suppliers, much to the frustration of Stockholm police.

“We have to be there ourselves when the goods are handed over. We have to see the crime with our own eyes,” said Gynning.

Despite months of increased surveillance, police in Stockholm have yet to carry out any significant busts of the “vodka-mobile”, said Gynning, explaining that it’s hard to localize the vehicle or vehicles responisble for distributing the alcohol.

“We need a large, coordinated surveillance effort across all of Stockholm County,” he told the paper.