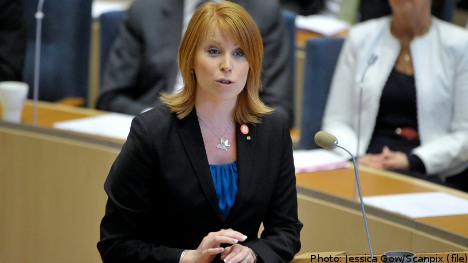 The 50-year-old man has confessed that he wrote the offensive tweets aimed at the minister, which were posted at the end of 2011.

“She became upset when she heard of what was written,” said prosecutor Ronnie Jacobsson to the Metro newspaper.

According to prosecutor, the online messages were sexually suggestive and contained sex-related words aimed at the politician.

The criminal tweets were quickly ‘snapped up’ by the Swedish security service, Säpo, according to Metro. Säpo then ensured the tweeter responsible for the messages was reported to police for sexual harassment.

The man was issued a fine of 2,000 kronor ($300) for his tweeting, a figure which the prosecutor considered worth justifying.

“The fines may seem low, but there are other kinds of sexual harassment that are considered to be more serious,” said Jacobsson.

The center party did not comment to the paper on the question of Lööf’s safety.

Meanwhile, Lööf has continued to tweet voraciously throughout the ordeal, and her account (@annieloof) has amassed nearly ten thousand followers.

Annie Lööf was appointed new Center Party leader in September 2011, and was shortly after made minister for enterprise.

2022 SWEDISH ELECTION
INTERVIEW: Sweden has been ruled for four years on ‘essentially the Centre Party’s programme’
Url copied to clipboard!