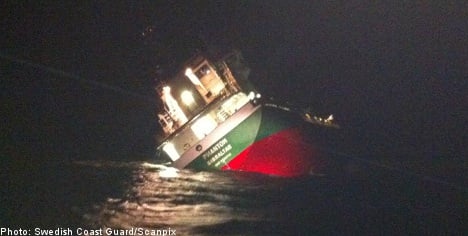 “It all went very quickly. We had to really rush there with helicopters, and the crew were chilled and had not even managed to get on their rescue suits. It was very worrying,” coastguard spokesman Jonas Andersson told AFP.

The Gibraltar-flag ship was carrying a cargo of timber to Casablanca.

The mainly-Russia crew were flown to hospital in Kalmar but were “doing well, considering the circumstances,” Andersson said.

“There is still a very big risk it will flip over and sink. We do not know how close it is to doing so,” Andersson said.

Swedish media reported a sudden shifting of the ship’s cargo could have caused the list.

On Thursday, a coastguard ship was working to keep the disabled vessel and its 31 cubic metres of diesel fuel from reaching land and other larger coastguard vessel was expected to arrive later in the day to assist in the operation in hopes of towing the “Phantom” to a harbour.

“At the moment, it’s hard to say how it will end,” Andersson told the TT news agency, describing the situation as a race against time.

“But it’s a risky endeavour to tow this ship because she’s listing so heavily. The risk of a total wreck is pretty high.”

TOURISM
How are Sweden’s tourist spots coping with the risk of coronavirus outbreaks this summer?