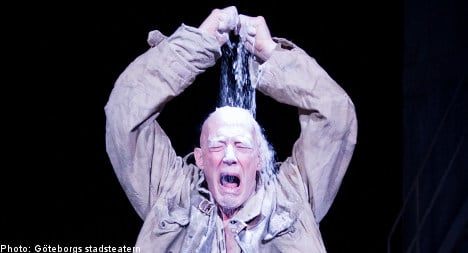 “It is very exciting. And it is amazing that we have actually managed to do this. It was a gigantic task,” said Niklas Rådström, who has spent the past two years working on “The Bible” set to open at the Gothenburg Stadsteater in southwestern Sweden on Friday.

“I know Max Reinhardt put up the Old Testament on Broadway in 1936 (The Eternal Road), but we have searched for others who have done both the Old and New Testaments, and found no examples,” he told AFP, adding: “We seem to be the first.”

With 15 actors, three musicians and two extras on stage interpreting around 90 different roles during the four hour and 40 minute play, Rådström said he had struggled to draw a continuous storyline from the material.

“This is not just a book, but an entire library of books … and the different parts often seemed like they were trying to push and pull us in different directions. It hasn’t been easy,” he said.

When writing the play, Rådström said he had tried to “ignore the past 2,000 years of interpretation history and go straight to the Bible texts, the stories inside.”

It was also important, he said, to approach the material in a serious manner without irony, out of respect for both believers and non-believers, and to interpret it “so it becomes meaningful and relevant to us today.”

“I hope to de-dramatize the conflict often seen between the secular and the holy. The Bible is relevant to everybody” in traditionally Christian cultures, Rådström said, adding he had yet to see any signs the play would give rise to controversy.

The play will show at the Stadsteater several times a week through May 8th.