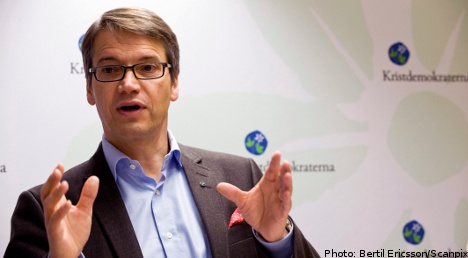 The other Alliance parties and the parties of the opposition have long supported a change in the legislation but the Christian Democrats have been reluctant to amend their stance.

Only a month ago, Christian Democrat leader Göran Hägglund claimed that the government had agreed that the matter would be put on ice and re-examined.

Further comments by Hägglund in the beginning of February indicated that the proposal to amend legislation to be presented by the government this spring would retain the sterilization requirement.

Hägglund was later forced to explain his comments, backtracking and explaining that the issue was still under review.

In a debate article published in the Dagens Nyheter daily on Saturday, Hägglund, together with senior party colleagues, however outlined the party’s new position in that it now wants the law changed and the sex change sterilization requirement removed.

It remains however unclear when the sterilization requirement will in fact be abolished.

Hägglund, who is as social affairs minister heads the department responsible for drafting the bill, explained that there is no certainty that it will be included in the bill expected in the spring.

“That’s an issue which we have to consider a little further. The aim is for us to remove the sterilization requirement, but I can not predict the exact point in time,” he told news agency TT.

Hägglund confirmed that the bill will remove current restrictions concerning the need to be a Swedish citizen and to be unmarried.

With broad parliamentary support for the changes, it is expected that the new legislation will come into force on January 1st 2013. Hägglund was however unable to say whether the abolition of the sterilization requirement will apply from the same time, or require an additional six months.

Hägglund revealed that the decision was taken by the Christian Democrats’ party executive on Friday, claiming that there were no reservations submitted by those present.

“This is a great victory in the work for human rights. Finally the Christian Democrats have listened to health professionals, the National Board of Health and Welfare (Socialstyrelsen), human rights organizations and other actors involved in the rights of transsexuals,” she said.