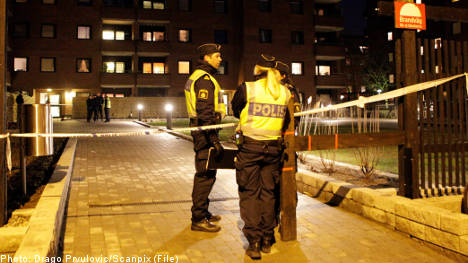 “It wasn’t just the family that was named on the net, my uncle was too. There was information about where I study and that my parents are married. Who takes these liberties? Is it because we are foreigners?” said Djina Timotijevic, 19, to the Sydsvenskan newspaper.

Timotijevic arrived home on Februrary 17th to the tragic news that a neighbour had been murdered in the apartment building’s garden.

The shock was quickly transformed into anger when the woman checked a link posted on her Facebook wall that led to to a post on a Swedish internet forum that stated her own parents were directly involved in the murder – as victim and offender.

“It’s so tragic what has happened. You don’t want to be linked and associated with such terrible events,” Timotijevic told the newspaper.

The post was published on Flashback, a largely anonymous public forum, where users can speculate about news, or even provide facts that may not be found in newspapers.

In this case, a poster who knew the victim was a 39-year-old mother of two took no time in posting as fact an assumption that Timotijevic’s parents were involved in the killing.

However, the incident had no relation to Timotijevic’s parents, other than the fact that they lived in the same apartment block.

Timotijevic’s younger brother even witnessed the murder, and was reportedly very upset.

“Freedom of speech has reached its limit. I feel exposed and frustrated,” Timotijevic told Sydsvenskan.

As a result of the accusations, the woman has been contacted by numerous friends and family who are both concerned and curious.

Timotijevic explained that the most difficult thing was the possibility of meeting someone who may not be aware that the Flashback report was false.

The family intends to take action.

“We are now discussing whether we should report it to the police. While it may not help, we want to test the limits and see how far it may lead,” Timotijevic told the paper.