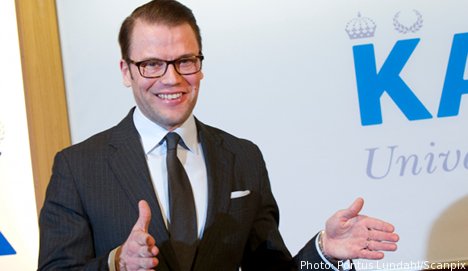 “This morning at 04.26am a very cute princess was born, 51 centimetres tall and weighing in at 3,280 grammes,” said the Prince.

“My feelings are all over the place right now.”

Mother and baby are doing fine according to the new father.

“It was all very nervous. There are always risks giving birth. But it went well,” said Prince Daniel, taking the opportunity to thank the Karolinska hospital for the care they have received.

He also asked the gathered press to respect the privacy of the family.

“As I am sure you can all understand, we have a great need just to be our own little family right now. You understand that surely, that we want to treasure what has just happened,” he said.

Specialist doctor Lennart Nordström was in charge of the medical procedure.

“They came in just before 1am, so it all went fairly quickly,” he told the press, adding that it all went very well.

“There is a radiant, happy new mother with a baby in her arms. The couple are glowing with happiness. There is something special about becoming parents,” said Nordström to TT.

He didn’t want to take any credit for delivering the next heir to the throne of Sweden.

“It is the Crown Princess who has given birth to a child. We have supported her in doing that, but she did all the work,” said Nordström.

It is still unclear how long mother and baby will remain at the hospital.

“This will, like in all other cases, depend on how mother and baby are and from that judgement it will be decided how long the Crown Princess and her daughter will stay,” he said.

Nordström told the gathered press he has been on standby for a long time after being asked early in the Princess’ pregnancy if he would help deliver her baby.

“I haven’t left Stockholm since New Year,” said Nordström, adding that it has been an honour.

Celebrations and ceremony will now begin in Stockholm and across the country.

At noon on Thursday a special 42-gun salute will be fired from the cannons on the Skeppsholmen island, in central Stockholm, to celebrate the birth of the new princess, Richard Beck-Friis, head of the Commandant Staff at the Royal Palace, told TT.

On Friday, salutes wil be fired from other locations in the country, namely Göteborg, Karlskrona, Härnösand and Boden where salute batteries are kept.

“And yet another salute will be fired in Stockholm then as well, this time from Kastellholmen,” said Beck-Friis to TT.

The carpets of the maternity ward have already been changed from their usual colour to a striking red to mark the occasion.

“I change the carpets here every week and when I heard the news I decided go for it,” said Daniel Holm, responsible for the hospital carpets, to TT.