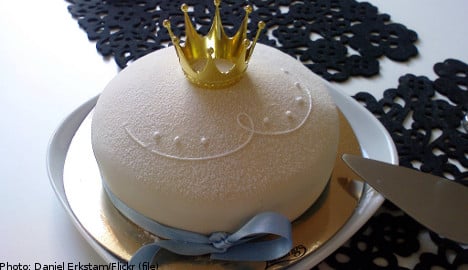 ”When I got to work today I knew nothing about the Royal birth, but the customers did,” said Vesna Ibragic from Katarina bakery in Malmö, in southern Sweden, to daily Dagens Nyheter (DN).

The bakery received their first order shortly after 7.30am on Thursday morning. And orders have continued coming since, according to the paper.

The cakes are running out all over the country, with bakery Thelins in Stockholm having sold out of the cakes as early as 9am. The bakery was awaiting another shipment of 20 cakes to begin with, having already sold four times as many as on an ordinary day.

A Gothenburg chain of pastry-makers told the paper that they had made an extra 100 cakes to mark the occasion and in Örebro, in central Sweden, one bakery has chosen to bring in extra staff to deal with the onslaught of customers wanting to purchase the popular cake.

”We have already sold twenty and we are expecting more orders. We are seeing an influx of customers at the moment,” said Petra Hällström of the bakery to DN.

Princess Cake is a traditional Swedish cream cake, which consists of alternating layers of sponge cake, whipped cream and vanilla custard, topped with a thick layer of marzipan, which is generally green, although it can also be white or pink.

The cake recipe, a popular favourite with most Swedes, first appeared in the ”Prinsessornas Kokbok” cook-book from 1930, which was published by Jenny Åkerström, a teacher of the young daughters to Prince Carl of Sweden and Norway, Duke of Västergötland .

The cake was originally called ”Green Cake”, on account of its green covering of marzipan, but as the young princesses like it so much, it soon became known as ”Princess Cake”.

And as Swedes are celebrating the birth of a new baby princess, they choose to do it with the appropriately named Princess Cake.

”It means a lot of work but that is positive. This kind of extra-production is what it takes when all Sweden’s monarchists are celebrating,” said Daniel Fuchs, vice president of Jerkstrand bakeries in Gothenburg.