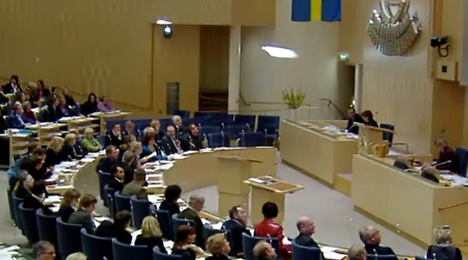 “This is not acceptable,” said Johan Linander of the Centre party, vice chairman of the committee on justice (Justitieutskottet).

“But there is an investigation into some that have been identified as collectors and until we have a guilty or not guilty verdict we can’t say if current legislation is too loose.”

The committee voted on three motions on Thursday, proposing to ban the taxation from Eritrea.

“We are wiling to take measures if current legislation can’t put a stop to this,” Linander told TT.

Currently all exiled Eritreans are expected to pay two percent of their annual income to the country.

In November several Eritreans living in Sweden filed a report with the police saying the practice amounts to tax collection using extortion and the International Public Prosecution Office (Internationella Åklagarkammaren) in Stockholm is currently looking to open a preliminary investigation.

Critics of the regime in Eritrea have voiced the opinion that stopping the tax may be a way to put pressure on Eritrea to release the Swedish-Eritrean journalist Dawit Isaak, jailed for unknown crimes without a trial for the last ten years.

The taxes have been described in a UN report as the largest source of income for the dictatorship.

According to Eritrea, the tax is completely voluntary.