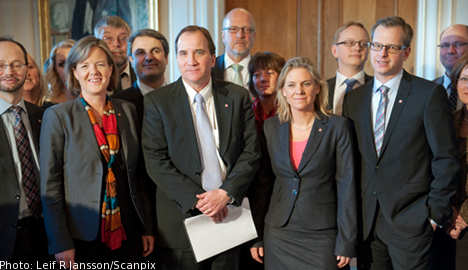 “Yes, that’s right and I am particularly happy to be able to recruit Magdalena Andersson and Emma Lennartson from outside (the Riksdag),” said Löfven to news agency TT on Thursday.

Löfven has chosen Andersson, a high ranking official at the Swedish Tax Agency (Skatteverket) to be the party’s spokesperson on economy and Lennartsson, from trade union Kommunal, as group secretary in parliament.

Löfven has also carried out some reshuffling, moving Jennie Nilsson from the committee on taxation to the committee for industry and trade, taking over as the industry spokesperson.

Fredrik Olovsson becomes number one in the finance committee and the one who will have to face minister of finance Anders Borg on the rostrum.

Group leader for the Social Democrats will be Mikael Damberg, who will also be the one to meet prime minister Fredrik Reinfeldt in the party leader debates.

“Looking at the whole picture, he was the best option,” said Löfven to TT.