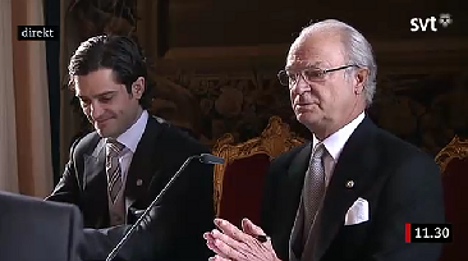 “I am sure that the Duchess will do her best to embrace the county of Östergötland,” the King said during the announcement.

The infant was formally introduced to the prime minister, the speaker of the Riksdag and the marshal of the realm in Stockholm on Friday morning.

“Her first name is Estelle, and then, of course Silvia, and then Ewa and finally Mary,” the monarch informed the government at the special Cabinet Council at Stockholm’s Royal Palace on Friday morning.

Since the new Royal baby girl’s birth, speculation has been rife in Sweden as to what she would be called.

Betting companies and the press presented their favourites and the little Princess forebears’ names were brought out, dusted off and inspected by the interested public, all who seem to have had their own preferences.

On the day of the little princess’ birth, the names most favoured by betting agencies were Alicia, Desirée and Kristina, although some Royal experts were hoping for Alice or Sophia.

Earlier on Friday morning, the Royal Court website had what looked like an official announcement published stating that the baby’s name was Ulrika Marianna Annika David – Duchess of Upplands Väsby.

Many speculated that the Royal Court website had been hijacked, but a spokesperson later confirmed that an error had occurred.

“It was a mistake,” spokesperson David Löfvendahl told the Expressen newspaper.

“It just happened to go out, but that’s obviously a fake name.”

The princess’ real name, Estelle, is of French origin, derived from the latin word stella or star.

The name has been in usage in Sweden since the 19th century but has never been very common.

In Sweden there are 1,394 women called Silvia and 941 use it as their first name, like the new princess’ maternal grandmother.

There are 9,638 women in Sweden called Ewa, of which 4,655 use it as their first name. One of these is Prince Daniel’s mother Ewa Westling.

After announcing the princess’ name at the Cabinet Council, the King also mentioned his first visit to see his grand daughter.

“The family was there visiting and we had a nice time together. She was very cute and did all the right things. It was a happy moment for the whole family,” the King said.

The King finished the meeting by asking the government to join him for luncheon.

At noon on Friday the traditional thanksgiving service Te Deum is held in the Royal Chapel, in Stockholm’s Gamla Stan.

The Royal Family will be in attendance, as will representatives for the Riksdag, the government and other high ranking officials, as well as Royal Court staff.