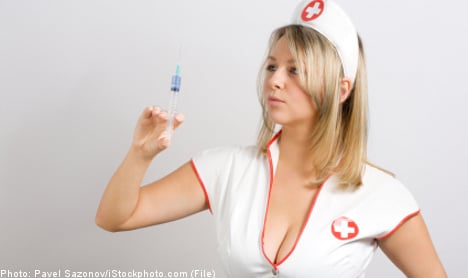 The original advert called for “TV-series hot” nurses and “Söder hipsters” to fill in the summer vacancies for nurses at the Stockholm South General hospital (Södersjukhuset) in Stockholm.

These “pre-requisites”, which head nurse Jörgen Andersson told The Local were only written to “catch people’s attention”, ended up making headlines in the international press and titillated the imagination of readers from around the world.

Now, a 64-year-old male nurse has reported the hospital to the Ombudsman for Justice (JO) after claiming the advert was discriminatory.

The man wrote in his complaint that he “hasn’t fixed the wrinkles on his face with plastic surgery” and that he has “a slight limp in his left leg – neither of which look good on TV”, according to newspaper Dagens Nyheter (DN).

Although the man is set to retire soon, he is qualified for the job and believes that the summer position mentioned in the ad would suit him well.

However, the specific details of the advert forced the man to question why he should be left in the lurch, despite his training as a nurse in the intensive care ward.

“Not in my wildest dreams could I imagine that the nurses at the Stockholm South General need to be able to appear on TV as part of their job, whether it’s an upcoming reality series, or on the hospital’s internal channels,” wrote the man in his complaint, according to DN.

The head nurses of the hospital have penned a public apology, which appeared in the debate section of DN on Friday.

“We are sorry if we have hurt anyone or created a distorted picture of Stockholm South General,” the apology read.

“Our idea of the nurse is quite different than that which has been conveyed by the media recently. Our view is neither male nor female, handsome or ugly, tall or short. Our image is professional, competent, responsible and well educated.

“We really want to emphasize that we have the best job in the world, and we believe many others would like to work with what we do. A job that makes a difference”.

The apology was signed by the eight head nurses of the hospital.