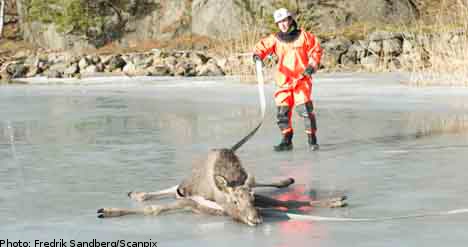 “It was four legs in all directions, just like Bambi,” Stefan Lind, head of Värmdö’s fire station, told the Aftonbladet newspaper.

In Värmdö, just east of Stockholm, surprised passers-by discovered the elk calf struggling with the slick surface, and called for emergency services, as the calf, stuck on ice, repeatedly tried and failed to get up on all fours.

Even though the firefighters succeeded in pulling the calf to shore, using a fire hose set on its backside, the whole incident proved such an ordeal for the calf that it finally had to be put down.

Another elk discovery had a happier ending, when a local man from western Sweden discovered a calf not far from his home in Öxnevalla.

“I was taking a walk, had a pram and a dog with me, when I saw the elk lying on the ice, some 20 metres from shore. It was only a calf, and the ice was so slippery that it couldn’t get back up,” said Hans Morgansson to local newspaper Göteborgs-Posten (GP).

When confronted with the helpless animal, Morgansson called emergency services. Although the elk put up quite a struggle, the team finally managed to drag it to shore.

“I put the calf in the sun, I thought it might like to warm up a bit. And I petted it a bit. In a while I’m going to go back and see how it’s doing,” said Hans Morgansson to GP directly after the rescue operation.

After having rested for a few more hours, the calf set back out into the forest, Morgansson told news agency TT.