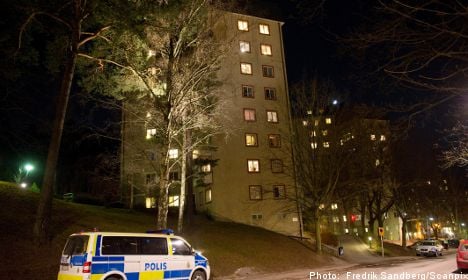 The firefighters were waiting below, having placed a large safety cushion to catch the woman, who had become trapped by a blaze in the apartment.

“We could not reach with the truck ladder, so we got out the safety cushion,” said Magnus Bengtsson of the Stockholm emergency services to TT news agency.

The woman leapt from the seventh story, 20 metres from the ground, yet did not make a perfect landing entirely on the cushion, and she was knocked unconscious upon impact.

Despite the concussion, firefighters managed to establish contact with the woman before she was taken to hospital.

The woman is recovering, however, with what has been reported as serious injuries, including several broken bones, according to TT.

A dog from the same building was rescued from the apartment, and is recovering at a veterinary clinic from burns and smoke-related injuries.

The fire in the eight-storey apartment in Sundbyberg, a suburb just north of Stockholm, was eventually extinguished by firefighters, yet police claim that they have not excluded the possibility of foul play.

It is not certain how the fire began, yet it had to be extinguished in several separate places throughout the apartment, raising suspicions that it may have been lit deliberately.