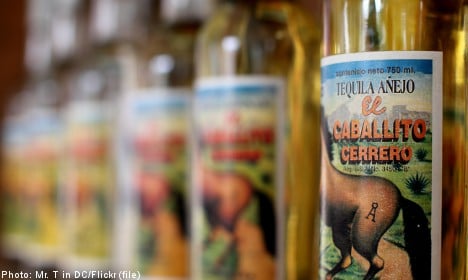 Tequila Wikinghielm from Motala, central Sweden, has always faced problems when it came to her name, reported the local Östgöta Correspondenten newspaper

Previously, Sweden’s Tax Agency (Skatteverket) had simply refused to recognize the Swedish teen’s name as legitimate when she was born in August 1997.

The family protested the decision, taking the case all the way to the Supreme Administrative Court (Regeringesrättan), which also rejected their bid to name the girl after the spirit often associated with Mexico.

According to Sweden’s naming laws, the Tax Agency has the power to decide which names are approved for children born in Sweden.

“First names shall not be approved if they can cause offense or can be supposed to cause discomfort for the one using it, or names which for some obvious reason are not suitable as a first name,” the law states.

As a result, the young girl was forced to accept the ruling and took the name Quila instead.

Despite this, Tequila claimed she has always called herself Tequila, along with her friends and family.

The girl is currently in the eighth grade and plans to be confirmed in the spring, which means she must be baptized first.

As she was never baptized as a child, Tequila decided to take another shot at getting the Tax Agency to approve her name.

This time, she sent her own personal plea explaining how she has grown into the name and that she wanted it to be official before her baptism.

A response came before long.

“Mum invited the family to lunch and when we sat around the table, I had a cake in front of me that said Tequila and the date – January 16, 2012 and an envelope,” Tequila told the corren.se.

In the package was the official document from the Tax Agency stating that her current name is Tequila.

“I started bawling. I’ll be framing this paper,” she said.

While the family was certainly in good spirits, there was no word on exactly what the drink of choice was for celebrating the 14-year-old Tequila.