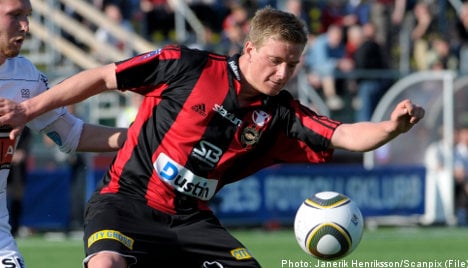 The 19-year-old Manchester City striker has been in scintillating form during his loan spell at Dutch side Feyenoord, racking up 18 goals in 17 matches, and Hamren says his recent performances have made him impossible to ignore.

“I think he clearly deserves it given the results he’s had with his club,” said the Sweden coach.

Guidetti’s blistering scoring streak with Feynoord has had much of the footballing world to take notice, especially after he netted his third hat-trick in a row earlier this month, making the first player to do so in the top Dutch league since 1963,

According to Hamren, Guidetti could find himself under “enormous pressure” ahead of his expected debut with Sweden’s national side.

Sweden’s coach said he may field Guidetti alongside Sweden’s talisman Zlatan Ibrahimovic in Wednesday’s game in Zagreb, although there is a possibility that the Milan striker could make way for Guidetti by dropping to the bench.

“It’s going to be gold to play with Zlatan,” Guidetti told the Expressen daily, adding that he expected a “tough match” against Slaven Bilic’s Croatia.

Sweden have been paired alongside England, France and co-hosts Ukraine in Group D at Euro 2012, which runs from June 8 to July 1 in Poland and Ukraine.