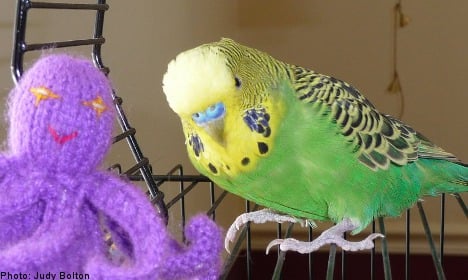 “Jag älskar dig, jag älskar dig,” chirps Disco the green parakeet, sending ‘I love you, I love you’ greetings across the ocean via the internet.

And Swedish isn’t the only language the New York-based parakeet, also known as budgerigars, can speak.

Bolton is an avid parakeet fan and after creating a YouTube video last year, realized that the world goes cuckoo over her pet.

With each video garnering thousands of hits, Bolton set up a Facebook fan page where supporters can get the latest on Disco’s new phrases and latest tricks.

And, of course, this parakeet even tweets (@DiscoParakeet on Twitter).

However, when Disco learned that one of his Facebook friends, a blue parakeet called Nalle from Malmö, fell ill, the bird learned how to comfort the budgie in a language Nalle could understand.

The result was captured in a short video which has bird loving web surfers flocking to YouTube by the thousands.

Bolton explained that Disco is such a quick learner because he can mimic human voices very easily, no matter the language.

She is also bullish on what else might be in store for the budding budgie and his Swedish friend.

“Well, what’s legal?! Seriously, language-wise, the sky’s the limit. Budgies can learn a LOT of languages, and he’s very young, not even two years old,” she said.

“He seems to know when we’re teaching him something new, and he gets excited about it. He recently learned [the Rolling Stones’ hits] ‘I can’t get no satisfaction’ and ‘Shattered’ and they seem to be his favourites right now.”

At first, Bolton was surprised by her pet’s internet notoriety, yet soon found that thousands of people worldwide had made fan pages for their own quirky pets, including Swedish Nalle, who even has his own blog.

Bolton needed only a little convincing at first, she admitted, and has now embraced the opportunity to add a little chirp to the online world.

“It’s really pretty nutty, but people love animals, and I am told all the time how much Disco makes people smile, including people dealing with major health issues. That makes us happy here!” she said.

Despite self-admittedly sounding like “a crazy bird lady”, Bolton was quick to point out that the underlying story of Disco and Nalle is one of international human friendship.

“Disco was videoed saying ‘Jag älskar dig’ because this human was worried about Nalle’s human while she waited for news about her little pet bird,” she told The Local.

“We need more of that in the world.”

For those curious about Nalle’s response to the warm wishes, the recuperated birdie said “Puss och kram mitt lilla hjärta” (‘Kisses and hugs my little darling’).