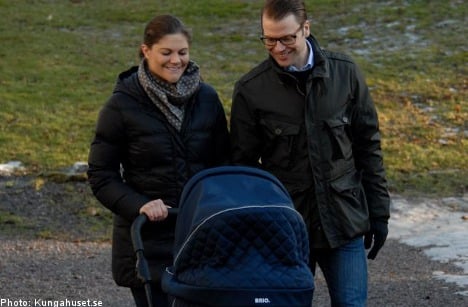 The picture was taken by Princess Estelle’s uncle Prince Carl Philip while the Crown Princess and her newly-expanded family were out for a stroll on the grounds near their home at Haga Palace on the outskirts of Stockholm.

Princess Estelle is not visible in the image, however.

“The background to the picture is that the Crown Princess wanted to go for a walk in Haga Park,” Royal Court spokesperson Bertil Ternert told the TT news agency.

As the image of Victoria and Daniel and their brand new Swedish-brand Brio pram spread across Swedish news websites and blogs, not to mention being shared several hundred times through the Royal Court’s Facebook page, Brio Baby CEO Håkan Johansson could hardly contain his excitement.

“This is absolutely fantastic,” he told the Expressen newspaper.

“Of course we’re happily surprised by it, and at the same time we’re sure the Crown Princess couple will be very happy with the pram they’ve chosen.”

Johansson refrained from trying to attaching a monetary value to all the free publicity the picture means for the company, however.