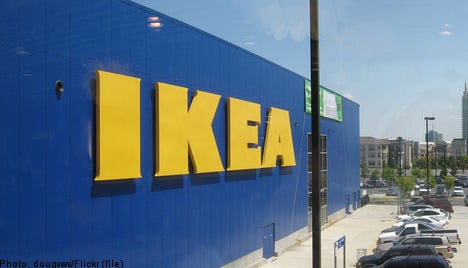 STIC (Système de traitement des infractions constatées) is a centralized records system which groups together data from police investigations, including both suspected criminals and their victims.

Accessing the documents without authorization is an offence.

“The allegations have come to our knowledge and we look very seriously upon it. We have started an internal investigation to find out if there is any truth to it,” Ikea’s Sweden-based spokesperson Ylva Magnusson told the Local.

“We are a company based on values and honour, and we respect and believe in the importance of both our customers and our staff members.”

In a statement issued in France, Ikea said it disapproved “clearly and vigorously all illegal practices that could undermine important values such as the respect for privacy.”

A series of internal emails published by Le Canard Enchaîné allege that, starting in 2003, the head of security at Ikea’s French operation regularly asked for checks on employees and clients.

Questions were asked about more than 200 people, including requests for criminal records, vehicle registration checks and affiliations with political organizations.

In one email reported by the newspaper, the head of risk management at Ikea asked whether a client involved in a dispute with the store was “known to police” and asked for a check on her address.

Another email reportedly requested information on someone who was thought to have made “anti-globalization remarks” and could even be an “eco-terrorist risk.

The newspaper reported that each check on the police files cost Ikea €80 ($108).

The STIC database has also been heavily criticized in France for inaccuracies.

A 2008 report by the data watchdog CNIL estimated that only 17 percent of the documents about individuals were accurate.

The company has been attacked before over its security methods.

A 2010 book, “The Truth About Ikea”, levelled accusations of racism and nepotism against the retailer. The book also claimed the company used surveillance methods that were worthy “of the Stasi.”

Newspaper Le Parisien reported on Wednesday that around ten Ikea employees are planning to lodge a formal complaint about illegal use of personal data. The charge can be punished with a €300,000 fine and up to five years in prison.

The employees also plan to launch an association for victims of IKEA (“Association de Défense des Victimes d’IKEA”) for employees, union representatives and customers who may have been affected by the alleged activities.

Find more French news in English at The Local France.