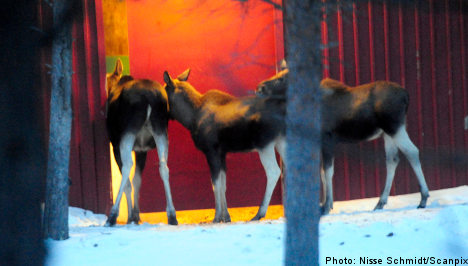 “I couldn’t believe it. The mother [elk] jumped the fence, walked up to the door, got down on her knees, and pushed the door open with her nose,” said photographer Nisse Schmidt to The Local.

If it’s not drunken elk getting stuck in trees, or elk threesomes, Sweden’s elk population just can’t seem to keep out of trouble.

And so it was on Wednesday, when Schmidt was called by his 62-year-old farmer friend Jarle Mosshäll to keep guard outside a barn in the wee hours of the morning to try and catch whoever or whatever might have been pilfering hay from Mosshäll’s barn.

The building is surrounded by a fence that is nearly two metres high, yet this proved to be no problem for the elk.

The mother simply hopped over the top and the calves slipped under, according to Schmidt, who managed to snap several pics of the elks as the made their way into the barn.

Enthusiastic elks have long been a problem for Mosshäll as they had been known to frighten his horses during the day and steal their hay from the paddock.

Throwing a tarp over the hay did nothing either, nor did covering the bales with pallets.

The most recent plot to outwit the elk was to use the barn to secure the hay overnight, as expensive hay prices were adding up for the frustrated farmer, according to Schmidt.

On Monday morning however, the door to the barn was open and more hay was missing.

“Jarle blamed his daughter for that one,” said Schmidt to The Local.

“He thought she left the door open the night before, and he made sure to shut it himself the next night. But yet again, the next morning he found the door wide open with even more hay missing”.

Taking cover in another nearby barn, Schmidt waited patiently, camera at the ready.

Before long, the mother elk and her two calves appeared, and promptly nosed their way into the barn.

Schmidt approached the mother elk, who then came out and stared him down for what he guessed was at least eight minutes, before the elk turned back and stood watch at the door while her calves took their fill.

Farmer Mosshäll says he is running out of options with the fearless mother elk.

“I’m going up tonight and try to put on some locks, but then maybe they’ll start to chase away the horses during the day again. She seems to be afraid of nothing,” he told daily Aftonbladet.

Photographer Schmidt is equally stumped as to how to combat the stubborn elk.

“I don’t think a lock will solve it, the moose would only crash the door in. And Jarle can’t shoot them – they’re protected here now,” he told The Local.

Schmidt added, however, that it is legal to shoot elk who are “acting aggressively”.

“However, I suppose they are acting a little aggressively, so who knows what will happen,” he said.