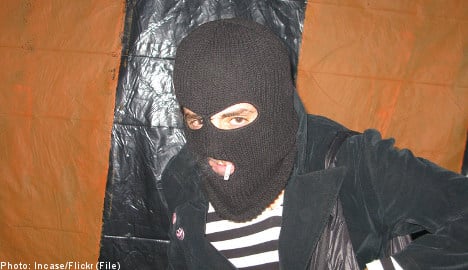 Local politicians in Kristinehamn, central Sweden, are convinced that a square in the centre of town needs parking spaces for horses.

They have already selected a shady corner of North Square they deem to be the perfect location, and are now trying to convince the City Council that it’s a worthwhile idea.

According to proponents of the idea, not only is there currently nowhere to leave one’s horse when coming into town to run errands, making the city more horse-friendly could lead to a boom in tourism opportunities even lead to horse tours and other tourist attractions, the politicians told the Kristinehamn’s Posten newspaper.

For now, the matter is in the hands of the council, who are left to decide “ja” or…”neigh”.

A would-be robber made things easy for police, after fleeing the scene of the crime and running directly through the front doors of the local police station.

The knife-wielding man failed to take any money in his attempted robbery, and ran through the streets of Halmstad in western Sweden in full view of gobsmacked bystanders, one of whom chased the man all the way to the police station, albeit unintentionally, wrote daily Aftonbladet.

No one was hurt, and the man was arrested for attempted robbery.

A 45-year-old man in Kungälv, western Sweden, took ‘pedal to the metal’ to new extremes on Thursday night, when he raced down the E6 motorway, slamming into ten cars along the way.

Luckily, no one was injured, and local police reported that there were no traces of alcohol in the man’s blood.

“I don’t know why he was in such a rush,” said a perplexed Björ Blixter of the Västra Götaland police to Dagen’s Nyheter (DN) newspaper.

Did you know that the last time Sweden was at war with England was exactly 200 years ago?

And it was a very polite fight indeed by the sounds of it, with no acts of war taking being staged by either country. Sweden even allowed British boats to be stationed off the Swedish coast at Hanö.

Blood was shed, however, when Swedish soldiers killed 30 Swedish farmers who were rioting against conscription policies in Klågerup, in the country’s south.

Swedish-born owner Corina Papadopoulou and her husband Franco Ofili opened the shop, which was described by The Telegraph as an “oasis of Scandinavian cool”.

Papadopoulou was reportedly thrilled with the award, and claims to have been inspired to open a shop after frequent queries on the streets of London as to where she got her daughter’s clothes – which were always from Sweden.

And that wraps up the News in Brief for this week, we’ll be back next Friday with more newsworthy tidbits from Sweden.