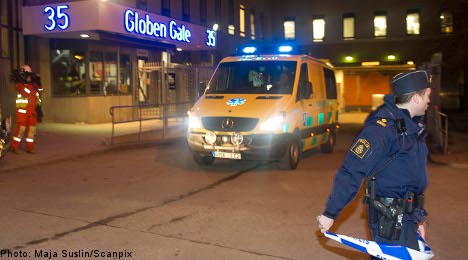 A young woman is reported to be in a critical condition with a further four people sustaining serious injuries.

The stage section collapsed during a concert by DJ Aviccii and the evening’s second concert was cancelled after the accident.

“For example it concerns spinal injuries,” he said.

When the accident occurred there were around 7,000 people inside the arena.

The police have confirmed that they have opened a preliminary investigation into criminal negligence.

Marie Lindkvist said that the concert was completed and that the atmosphere was calm, with all those in need receiving medical attention.

The second concert planned for Friday evening was however cancelled after the accident and it remains unclear what will happen with Saturday’s programme.

Neither the concert organiser or Stockolm Globe Arenas was willing to speculate over possible causes for the accident.

“That will have to be revealed by the police investigation,” said Kalle Pettersson at the promoter STG Live.

The platform which collapsed had been built by an external supplier and had been constructed specifically for this event.

“The firm has followed existing norms and regulations,” Pettersson claimed.

He was unable to specify exactly how many people were on the platform at the time, but underlined that the capacity had not been breached.

The decision to continue the concert was taken in cooperation with the police and arena management.