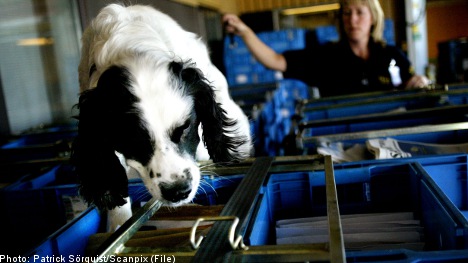 High schools and upper-secondary schools will be targeted in a series of spot checks throughout the spring, according to a report in the Helingborgs Dagblad (HD) daily.

“We will take the chance while pupils are in lessons in their classrooms,” said Olle Olsson at Landskrona police to the newspaper.

The dogs will be used to comb lockers, toilets and corridors for illicit substances and if they pick up the scent of illegal narcotics, then any responsible pupils will be taken in for a drugs test.

The plan, which has previously been adopted in Jämtland in northern Sweden and in Norway, has however come in for criticism from some local politicians.

“My spontaneous reaction is that it is completely reprehensible,” said Leif Olin, a Social Democrat member of the municipal education committee, to HD.

“School should be considered a place of work for pupils and staff and I don’t think sniffer dogs would be sent in undercover in any other workplace,” he added.

The initiative has however received the backing of local Moderate and Liberal Party politicians, while it is underlined that the police are the body responsible for the plan.

Many schools in the municipality have only recently been informed of the new counter-drugs plan and thus have not yet had the chance to inform parents and pupils.