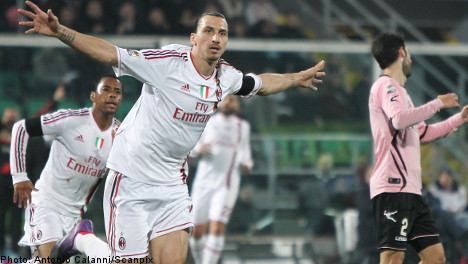 The win allowed Milan to open a three-point lead over Juventus, who suffered a setback when they were held 1-1 by Chievo. The Turin team still have a game in hand but are handicapped by a vastly inferior goal difference.

“I’ll get the whole team to sign the ball and then take it home with me,” said Ibrahimovic, whose last hat-trick was as a Juve player in 2005.

“We played an important game very well and must now keep going like this.”

Palermo had not lost to Milan at home since 2006 but Ibrahimovic soon put that record to bed by giving his side a 3-0 lead by the 35th minute.

He broke the deadlock in the 21st minute when Sulley Muntari set up Robinho, who found the big Swede in space to find the target with a left-footed curler.

Ten minutes later it was 2-0, when Ibrahimovic poked a low drive past goalkeeper Emiliano Viviano.

He completed his hat-trick after 35 minutes when he guided a shot inside the right-hand post from a few yards outside the area.

Milan’s rout was confirmed just before the hour mark when Thiago Silva headed in a cross from Stephan El Shaarawy.

Juventus, who had drawn 1-1 in a bad-tempered clash with Milan last weekend, went ahead against mid-table Chievo after 18 minutes thanks to Paolo De Ceglie, despite the left-back appearing to be in an offside position.

But Chievo stunned the Turin giants with a 76th-minute equaliser through Boukary Drame, who found the target following a mazy dribble from Davide Moscardelli.

Sunday sees the Rome derby between Roma and Lazio.

Lazio, who won the season’s first derby right at the death, will expect to bag full points as they chase down the top two — they are currently level on 45 points with third-placed Udinese, who take on Atalanta.

But Roma, blowing hot and cold under Luis Enrique, can overhaul Napoli and move into fifth with a win.

The Neapolitans, likely to rest several key names ahead of their potentially season-defining Champions League visit to Chelsea, host Parma looking to cut the five-point gap on Lazio.

Meanwhile, embattled Inter Milan coach Claudion Ranieri denied on Saturday that he was living on borrowed time as his side prepared to end a dreadful run of seven defeats and a draw by beating Catania on Sunday.

“I don’t see the game against Catania as my last chance,” former Chelsea and Roma coach Ranieri insisted.

“The club has total confidence in me. I am determined. I don’t feel I am under the microscope as the situation was more critical when I arrived than it is now.”

The Nerazzurri’s poor run has seen them eliminated from the Italian Cup and slide to seventh in Serie A, nine points off a Champions League qualifying berth.

They also have to overturn a 1-0 deficit in their March 13 last-16 Champions League second-leg clash with Marseille — which could in itself comprise the real last chance for Ranieri.

Ranieri added he would likely leave out Dutch star Wesley Sneijder, who is struggling to find his form, against Catania.

“It’s not accurate to say Sneijder is a problem — but he is not having his best year and you have to deal with that in a certain way,” Ranieri explained.