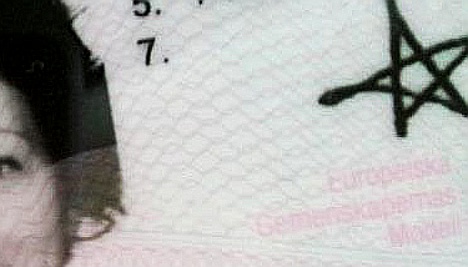 ”It was a coincidence that it was a star, really – an angry coincidence,” Rytterbrant told The Local.

Anna Rytterbrant was in need of a new driver’s licence and obtained the correct forms from the Swedish Transport Agency (Transportstyrelsen) and filled them in.

But when she got to the little box where she was asked to enter her signature she failed to notice that the instructions stated she needed to keep within the borders.

The forms were consequently sent back to her to amend and she painstakingly filled them out again. Only to be told it still wasn’t good enough.

Rytterbrant decided to call up and confront the agency.

“I had worked myself up to ask them what it was they wanted and I was ready to yell, but that fell flat when the guy told me to write whatever I wanted. ‘A squiggle or a line’ would do,” Rytterbrant said.

Despite these instructions, Rytterbrant didn’t quite believe in the agency’s laissez-faire approach.

“I decided to test them. I had had the forms sent back to me so many times already, one more wouldn’t harm,” she said.

So Rytterbrant entered a small five pointed star instead of her name, in a fashion to look a little like her first initial A. It fitted nicely within the appointed space.

Sending in the forms, she was eager to see what would happen next. And was flabbergasted when her new driver’s licence arrived, bearing the five pointed star as her signature.

According to the agency, there are no rules as to how the signature should look, as long as it fits within the box on the form.

“You should write your signature in the signature-box. That’s all we write,” said Bo Grönkvist at the agency to Sveriges Radio (SR).

“The guy I spoke to said that no one looks at the signature anyway and that our handwriting changes over the course of ten years anyway,” said Rytterbrant.

After seeing her star, many of her friends are now starting to ponder what they might choose.

Rytterbrant said she is very pleased with her star for the moment but not certain she wants to wait another ten years for another stab at a creative new signature.

“Maybe it will break in a year or so, who knows…,” Rytterbrant told The Local.