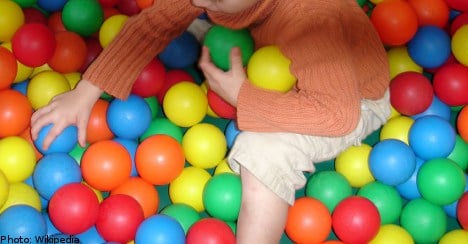 “It feels heavy. We hadn’t expected this. I certainly hope that Ikea will learn something from this and look over their routines for how they treat their customers,” said Filippa’s mother Annica Nordin.

The girl and her mother was visiting the Ikea store in Helsingborg, in southern Sweden, in May 2009, when the flabbergasted mother was told Filippa wasn’t allowed in the children’s area’s ballpit.

The playland staff had turned away the young girl, who suffers from a very unusual chromosome discrepancy, for “safety reasons”. They believed that it wasn’t possible to communicate with her despite the girl’s entreaties, saying “mummy, I am not handicapped”.

Filippa’s mother Annica offered to accompany the girl in but said her request was turned down by personnel on duty at the play area.

But according to Ikea, the staff on hand offered several alternatives for how Filippa could be kept under guard but that her mother had rejected them.

However, Ikea customer relations manager Hans Gårlin stressed that the company does not see itself as faultless in the matter.

“We see the whole situation as a failure,” said Hans Gårlin, customer relations manager at Ikea to news agency TT.

According to the company, the situation arose as a result as glitch in communication between the furniture giant staff and the family.

Early in the process they had offered a settlement of 10,000 kronor ($1,500) that the family had turned down, opting instead to report the matter to the Swedish equality watchdog Diskrimineringsombudsmannen (DO).

However, the agency dropped the investigation after three years, causing Nordin to take the matter to court.

Although the district court found that it may have been detrimental to 5-year-old Filippa to be turned down by the Ikea playland staff, the fact that her mother lost the case means the company doesn’t have to review its rules on who is allowed in the children’s area.

But according to Görlin, the company has apologized several times because “the family’s visit wasn’t a positive experience”.

“Everyone should be welcome at Ikea. But in this case communications have faltered, we need to look into that and be clearer. However, the verdict clearly shows that there is nothing wrong with our security routines,” Gårlin said to the Dagens Nyheter (DN) newspaper.

The family was represented in court by lawyers from the Centre For Equal Rights (Byrån För Lika Rättigheter) which will now be liable to pay the legal costs of the trial.

However, instead of the 50,000 kronor Ikea had demanded, the court said the centre would have to pay 1,205 kronor in legal costs.