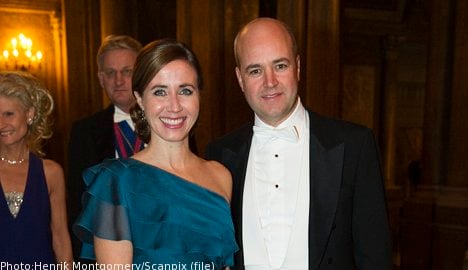 On Wednesday evening an email from the prime minister’s press office was sent out to the major news outlets in Sweden informing editors of the separation.

“I would like to inform you that Fredrik and Filippa Reinfeldt have separated,” press spokesperson for Fredrik Reinfeldt, Roberta Alenius wrote, according to daily Expressen.

In the statement, Alenius informed the press that the couple had separated but that Fredrik Reinfeldt would continue to be officially registered at the couple’s house in Stockholm.

More than that she was not willing to disclose.

“We have nothing more to say than what we have said in the statement, “ said Alenius to daily Aftonbladet on Wednesday evening.

Alenius couldn’t say why the couple had decided to separate or if they are planning a divorce in the near future, according to the paper.

The surprise revelation follows Tuesday’s announcement that the couple was moving house, selling the detached house in the Stockholm suburb of Täby that they had bought 13 years ago.

Both Reinfeldts have successful political careers.

Fredrik Reinfeldt has since 2006 headed Sweden’s centre-right coalition government, which is made up from his own Moderate Party, the Centre Party, the Liberal Party (Folkpartiet) and the Christian Democrats.

Filippa Reinfeldt has held the post of Stockholm county council chair since 2006.

However, political scientist Ulf Bjereld doesn’t expect the separation to affect either of the Reinfeldts’ careers.

“It depends a little on the the circumstances but as it looks right now I don’t foresee any political consequences,” he told news agency TT.

When Fredrik Reinfeldt was made prime minister the couple moved to the official residence Sagerska Palatset in central Stockholm.