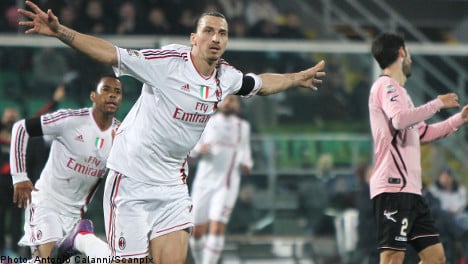 “In Italy there’s a lot of talk about ‘Ibra’ being able to become the best player in the world, but in order to become the best, you have to perform in the big away games, like the one versus Arsenal,” Laudrup said, according to football site goal.com.

According to the latest ranking by the football statistics website Whoscored.com, Swedish Zlatan is ranked as number three in the world with a rating of 8.17, beaten only by Argentina’s Lionel Messi at 8.67 and Portugal’s Cristiano Ronaldo at 8.35.

But according to former AC Milan player Laudrup, who was voted Danish player of the year on four occasions, it takes more to be the number one player in the world.

He referred to Zlatan’s disappointing performance in AC Milan’s 3-0 Champions League loss away against Arsenal on Tuesday.

“You have to perform in the big away games. ‘Ibra’ didn’t do that. It’s one of the reasons why he won’t surpass Messi and Ronaldo,” he said, according to the goal.com.

After his team’s defeat to Arsenal, Zlatan said that the performance at the Emirates was not worthy of the seven-time European champions.

“You can lose in many ways but it’s not acceptable to lose the way we did this time. We’re Milan and we should be better and more stable than that,“ Ibrahimovic told Swedish journalists on Wednesday.

The big striker also said he felt uneasy with the 4-3-3-formation coach Massimiliano Allegri had opted for at kick-off, although he blamed the performance on careless mistakes.

“We were too cautious and we didn’t try to play our match. Throughout the whole period of playing three up top I felt out of position,” Zlatan told the gathered press.