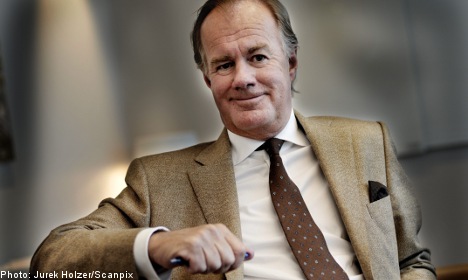 Persson came in at number 8 in the 2012 Forbes rankings (up five places from last year), with an estimated fortune of around $26 billion.

Since first being created by Erling Persson in 1947, the H&M clothing empire continues to expand internationally, having added new stores in Croatia, Singapore and Romania.

The company brought in designs from fashion houses Versace and Marni to its range this year, and now has 2,500 stores in 43 countries.

The Marni collection is set to hit Swedish stores on Thursday.

Persson, who took over the company in 1982, is a founder of the Mentor Foundation, a nonprofit that combats substance abuse among youth.

His sister Liselott Persson is the fifth highest-ranking Swede on the Forbes list, coming in at 304th place worldwide with an estimated fortune of $3.6 billion.

Packaging matriarch Birgit Rausing of TetraPak fame came in at number 50 with an estimated fortune of $14 billion, followed by brother-in-law Hans Rausing at number 88 with $10 billion.

Hans sold his part of the Tetra Laval packaging company to brother Gad Rausing in 1995.

In 1980 the company headquarters were moved to Switzerland and the Rausing family has long been based outside of the Swedish borders in an effort to escape the country’s high taxes.

Ikea mogul Ingvar Kamprad, who was the highest ranking Swede in 2010, saw his standing among the global wealth elite drop precipitously.

The head of the flat pack furniture giant was ranked in 377th place, down from 162 last year, and 11th place in 2010. His estimated fortune was measured at a mere $3 billion after lawyers showed that Ikea is owned by a foundation in tax haven Lichtenstein, which Kamprad created and now heads.

Among the rest of the Swedes featured on the list is Antonia Johnsson at 146 with a fortune estimated at $6.5 billion.

Self-made education billionaire Bertil Hult was a new addition to the billionaires list this year, coming in at 377th place, and 6th place in Sweden.

The world’s overall richest person for the third year running is Carlos Slim Helu of Mexico, worth an estimated $69 billion, followed by IT mogul Bill Gates with $61 billion.

Facebook giant Mark Zuckerberg came in at 35th place, with an estimated fortune of $17.5 billion.

While Forbes ranks Kamprad at number 377, The Local reported on the Bloomberg Billionaires daily list on Tuesday, which listed Kamprad at 4th richest man in the world with an estimated worth of $40 billion.

Forbes and Bloomberg employ different methodologies in determining their estimations, with Forbes taking into account their billionaires direct net worth.

Forbes wrote in their review that it was due to Kamprad’s transferal of his economic stake in Ikea to his philanthropic foundations, and then selling them the balance, that his net worth took such a dive this year.