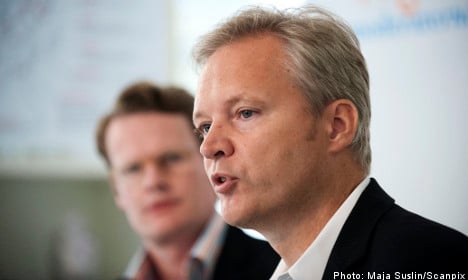 The Local reported during the week about the claims that first broke via Sveriges Radio (SR) in which secret documents showed that the Swedish Defence Research Agency (Totalförsvarets forskningsinstitut, FOI) was planning to finance an arms factory, named “project Simoom”.

According to SvD, documents show that Simoon deals with the “renovation and modification of anti-tank weapons”.

Tolgfors staunchly denied these allegations, claiming he had only heard of the plans and of the subsequent dummy company, SSTI, which was to fund the factory, this week.

However, Tolgfors on Friday conceded through his press secretary to Svenska Dagbladet newspaper (SvD) that he had indeed heard of these plans and SSTI as early as two years ago.

The confession was sparked by an email to SvD from Secretary of State Håkan Jevrell.

“I received information about SSTI’s state of affairs when the FOI’s general director Jan-Olof Lind informed me about it at the beginning of 2010,” wrote Jevrell in the email.

Jevrell was Tolgfors’s closest advisor, and claims to have passed on this information to him at the time.

On Thurday evening, this was confirmed by the defense ministry’s press secretary, Mikael Östlund.

“If the Secretary of State made such a statement, it is clear that he is to give it to the defense minister,” he told SvD.

When pushed to reveal whether Tolgfors had revealed the information to his government colleagues, Östlund claimed that this was unknown.