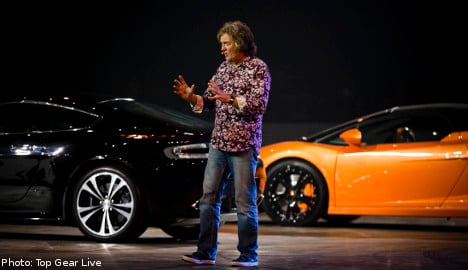 James May: Hmm, the Swedish Chef from the Muppet show. Snow. Saunas. Saab and Volvo spring immediately to mind. Oh, and nice bread.

TL: How long are you here for?

JM: Only 4 days this time. We have to do Top Gear Live in Denmark too, so we have to prepare for that. I have been to Sweden previously but only working, so sadly it has generally been rather short stays.

TL: Anything special you are planning to do while here?

JM: I rather fancy trying some of that traditional Swedish massage. No rolling about in snow, mind, or being whipped. Just therapeutic deep tissue massage by someone with kind hands.

TL: Are Swedes really into Top Gear, you think?

JM: They seem to be. I always think the show might seem silly to Swedes, as we Brits think of them as very level-headed and serious people, but the show seems to appeal across the cultural divides – we are rather free-thinking and modern, I guess.

TL: Would you be surprised if you were recognized on the streets of Stockholm?

JM: I am still quite surprised when it happens in London, I am still not used to it. We’ve been to some remote places in Iraq, Japan and the South Americas with the show and we’ve been recognised everywhere we went – to me it feels remarkable wherever it happens.

TL: If you could meet one famous Swede of your choice, who would that be?

JM: Crikey. Well, there was that scientist, no hang on – he was Swiss. And then there’s Björk… no – she is Icelandic, isn’t she? There’s Abba, I guess. Oh, and Britt Ekland. And Greta Garbo.

TL: What’s the best thing to come out of Sweden car wise?

TL: I hear Saab’s on offer on the cheap – you interested?

JM: It’s funny, Jeremy (Clarkson) and I actually talked about this on Top Gear the other day. We reckoned we could buy Saab for £1 and we got quite excited about it until we realized we’d have to pump a lot of money into it to actually make cars. So we decided against it – we’ll buy a pub instead, Jeremy and I, when we retire.

TL: In Sweden, Saab is considered an iconic brand, would you agree?

JM: Saab is iconic – it is seen as such in Britain as well. Here it is driven mainly by the ‘intelligentia’, by architects, graphic designers and specialist doctors. It’s definitely driven by a special sort of person. In fact, there’s a bit of a cult of Saab in the UK. Saab owners wave to each other as they drive by. And you’ll never hear anyone say ‘look at that lunatic in the Saab’.

TL: Is it worth saving?

JM: In Britain, we are very sad about the demise of Saab and if there is a way to save the quirky design it should be done. Saab’s a great car enthusiast’s car. So much to talk about.

TL: Could a Volvo ever be described as a “sexy” car? What would it take?

JM: Volvos are sexy these days. When I was a boy they looked sort of square and were laughed at a bit, although still admired in their own way. Today they are practically Saabs. In the UK they are driven by public school yummy mummies picking up their offspring.

TL: The Stig – his name sounds vaguely Swedish to our ears – could it be that you are really here to visit him?

JM: Ah, well, you know I can’t reveal that. Stig does sound Swedish and he has sort of become this Father Christmas figure who may or may not be living in a North Pole cave – but I can say nothing more about it.

TL: Here at The Local, we have an on-going feud regarding the word elk versus the word moose. If one of these critters were to hit your bumper during your stay in Sweden, would you say that you had an elk accident or a moose mishap?

JM: I would definitely say elk. But isn’t it the same animal anyway?

JM: Yes, you can definitely put me down in the elk camp.