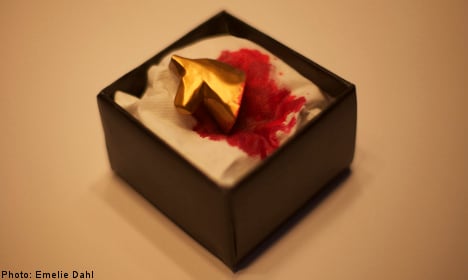 “We were playing around with ideas, and thought the famous Dalarna horse with its head chopped off made a great image,” said Jesper Wallerborg, digital director of United Power, to The Local.

In a nod to The Godfather film, the advertising team decided to lop the heads off the iconic wooden Dalahäst, paint them gold, and send them in small boxes to retail companies, with a note saying “Humble notice – two weeks left” followed by a link to their campaign.

But when hardware chain Clas Ohlsson received the package on Tuesday morning, staff members thought it was a threat from an angry customer and alerted security, who started searching for names.

The package has been mistakenly delivered to the complaints department instead of the advertising office – as the Swedish words for “complaint” and “advert” are extremely similar (reklamation and reklam).

“I had to make a formal apology this morning,” Wallerborg said.

The heads came nestled in white fabric and in a pool of what appears to be blood. In The Godfather movie, a real horse’s head is severed and placed between someone’s sheets as a threat and a warning.

The advertising campaign was for a competition called the Gyllene Hästen (“The Golden Horse”), which is a marketing competition for companies in the county of Dalarna, central Sweden.

According to Wallenborg, everybody involved “laughed it all off eventually”, but the campaign achieved its overall ambition – to raise awareness and to get more companies to participate in their competition – even if a few feathers were ruffled along the way.