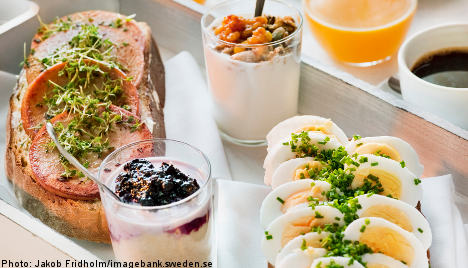 Despite the practice being a tradition “as old as the police force in the area”, Västmanland police commissioner Lars Hallberg considered that it was finally time to scrap the morning ritual, which he claimed was not only a waste of time, but also a waste of money.

“I’m against the whole procedure. To go shopping first, then to sort yourself out and get everything ready. Cooking eggs, cutting tomatoes etc. It ends up being many working hours in a year,” he said to the local Västmanlands Tidning (VLT) newspaper.

However, staff members at the station are not all seeing things from Hallberg’s perspective; in fact, they have interpreted the claims to mean that they can’t even visit shops in their uniforms to buy their food.

“This is ridiculous. What difference does it make if we go out and shop in uniform? It’s just as much a preventative measure,” said one anonymous policeman to the paper.

“Or if someone thought of robbing the shop in question, and then sees that there’s a police car out the front, then yes, maybe then we have prevented a crime,” the officer added.

Despite grumblings from the rank-and-file, Hallberg’s plans to abolish on-the-job breakfasts has been hailed by police professor and author Leif GW Persson.

“It was about bloody time. They can damn well begin working like everyone else,” he told VLT.

When asked why the proposed ban on the police breakfast tradition had caused such a kerfuffle, Persson responded:

“It’s because they’re so bloody spoiled. You’d think they were little children. It’s not surprising that criminiality is in the state it is. We have an eight hour work day. End of story.”