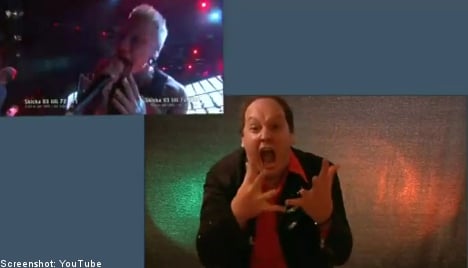 The challenging gig ended up paying big dividends for Fransson, however, with the unknown actor’s unexpectedly passionate rendition of the song “Mystery” by Swedish metal band Dead By April catapulting him from relative obscurity to near instant celebrity.

Following last Saturday’s broadcast, a YouTube clip of Fransson’s rendition of “Mystery” found its way on to YouTube, resulting in interviews with several newspapers and television stations.

Dead By April was so impressed with Fransson’s performance the band linked to the clip from its official Facebook page, calling his act “absolutely fantastic”.

With his wild gesticulations, head banging, and uncanny facial contortions, Fransson “tried to find the two characters in the song” he told the Dagens Nyheter (DN) newspaper.

“We try to convey both the music and the characters. To be honest, I think the deaf heard what the guy in Dead By April was growling better than those who can hear,” he joked.

Check out the video below and judge for yourself.