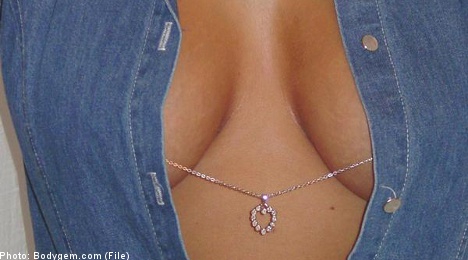 The man took his time browsing around the shop, which is called Ladyland and located in central Sundsvall, in June last year.

Store employees recalled him as friendly and chatty, according to local paper Sundsvalls Tidning.

However, upon leaving, the 18-year-old set off the store’s anti-shoplifting alarm.

A search of the man revealed he had pocketed a so called nipple chain, worth some 119 kronor ($18).

The bust-adorning piece of jewelry consisted of two hooks to be fastened on the wearer’s nipples, with a chain running in between.

When questioned by police, the 18-year-old said that he had “forgotten to pay for the item”, claiming that the shopkeeper was overreacting, according to the paper.

However, the man had earlier texted the owner of the shop, saying “sorry I tried to steal from you”.

The 18-year-old was caught shoplifting again in February when he nicked three diet bars from a local supermarket.

When asked why he was stealing, the teen said that he had been having a bad time at home recently and that the reason he stole was to feel a sense of achievement, reported the paper.