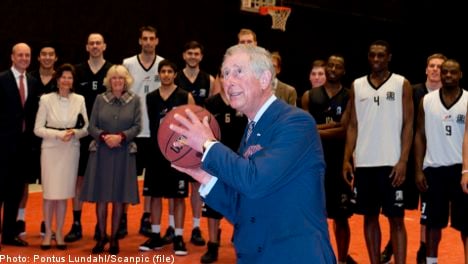 The Prince of Wales has been busy since arriving in Sweden on Thursday, kicking things off with a visit to the Fyrahuset youth centre in Stockholm, where a show was performed with singing, dancing, and basketball highlights.

The prince was accompanied by Camilla, Duchess of Cornwall, Queen Silvia and prime minister Reinfeldt.

Both the prince and Reinfeldt delighted crowds with their enthusiasm to shoot a few hoops.

However, the prince’s ball skills left a lot to be desired.

In terms of statistics, Charles came away with an empty scorecard, reportedly shooting zero for three attempts, according to TT.

Reinfelt, however, missed his first but drained his second and called it quits with a cool 50 percent field goal percentage. A rematch, for the moment, would appear to be a long shot.

On Friday, Sweden's Crown Princess Victoria and her husband, Prince Daniel, met with Prince Charles for a lunch at the Royal Palace in Stockholm, taking a temporary break from her maternity leave.

Victoria has been on leave for the month since the birth of Princess Estelle, and according to Annika Sönnerberg, spokesman of the Royal Palace, the princess will be back to her usual duties ”when it’s possible”.