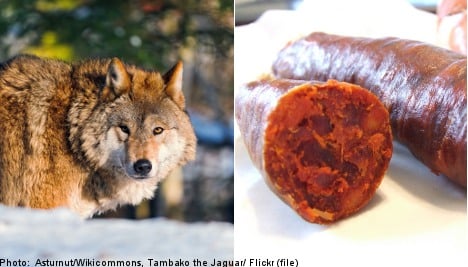 There were ten sausages in total, each containing a vial filled with a white powder which police suspect may be cyanide, according to the Aftonbladet newspaper.

“Someone has most likely laid them out to poison wolves,” said Sven-Åke Petters of the Dalarna police to the paper.

The discovery was made on Friday near Bingsjö, outside Dalfors.

While it is unclear exactly what or who the poisoned sausages were intended for, police expressed their concerns over the threat the contaminated chorizo posed to local children.

However, it is still unknown whether the white powder found in the sausages was indeed poison.

The police have sent the sausage samples off to be tested by the National Laboratory of Forensic Science (Statens kriminaltekniska laboratorium – SKL).

And the potentially deadly plot uncovered in Dalarna is not the first time that poisoned food has been discovered in the Swedish wilderness.

According to local newspaper Dalarna Tidning (DT), there have been six reported cases of poisoned meat left out in the wilderness in Rättvik’s municipality since 2004.

Chorizo, the meat of choice used in the most recent incident, is a smoked sausage which is often spiced, commonly exported from Spain and Portugal.