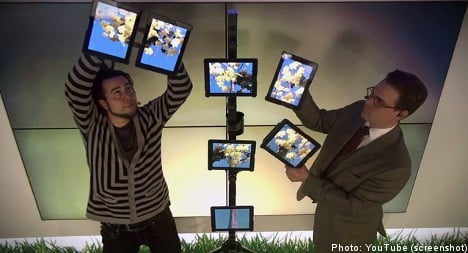 The Stockholm-based organization came up with the idea, which Kylberg claims was conceived in an attempt to show a conventional message in a more playful way.

Since being posted to YouTube on Friday, the clip has been viewed over 500,000 times.

The video (which can be viewed below) shows magicians Charlie Caper and Erik Rosales baffling a small audience with trickery, sleight of hand, and seven iPads.

The performance was filmed in Cannes, France, at the MIPIM investment and real estate convention which took place earlier this month.

This convention also made Scandinavian headlines after Swedish representatives placed banners and advertising with the slogan “Stockholm: The Capital of Scandinavia”, outraging Norwegians and Danes who were also at the event.

However, staff members of the Stockholm Business Region are now revelling in the video’s success.

“We decided on this production because we wanted to show that Stockholm is the hub for new technology, especially IT, and putting the video on YouTube has allowed a much bigger audience to see the message,” Kylberg said.

And while they may be gobsmacked that the video has proved so popular, the organization is glad to see the hard work continues to pay off – over and over again.

“It’s crazy to think that it’s spread over 500,000 times, but it’s great to see that the message is spreading, and that people know that we love the city of Stockholm – the Capital of Scandinavia,” she told The Local.