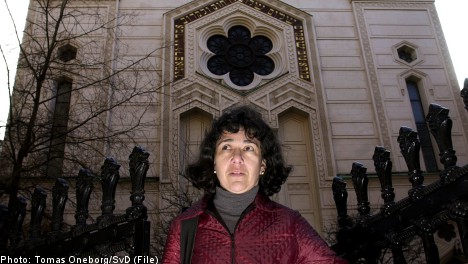 Lena Posner-Körösi, chair of the Jewish Community in Stockholm

“There has to be a change in the way Ilmar Reepalu speaks and the way he behaves and in what he says and doesn’t say,” Lena Posner-Körösi, chair of the Jewish Community in Stockholm (Judiska Församlingen i Stockholm) told The Local.

Posner-Körösi was one of three Jewish community leaders to sign a letter sent on Friday by the Official Council of Swedish Jewish Communities (Judiska centralrådet i Sverige – JC) to Social Democrat party head Stefan Löfven.

“With this letter, we want to point out that Ilmar Reepalu no longer has any credibility among us Jews in Sweden,” reads a letter signed by the heads of the Jewish communities in Malmö, Stockholm, and Gothenburg.

“Regardless of what he says and does from now on, we don’t trust him.”

The letter was sent after Reepalu suggested in an interview that the Sweden Democrats, a political party with a clear anti-immigrant and anti-Muslim line which has its roots in Sweden’s neo-Nazi movement, had “infiltrated” the Jewish community in Malmö to foster anti-Muslim sentiments.

On Monday, it emerged that the Social Democrats had responded to the letter by suggesting a meeting.

“Stefan Löfven called me basically as soon as he got the letter and said he wanted to meet as soon as possible,” Posner-Körösi said.

“We take this as a very positive signal that they take this matter seriously.”

She added that she and others in Sweden’s Jewish community have grown tired and frustrated by Reepalu’s repeated “anti-Semitic” statements in recent years.

“His statements provoke a lot of strong sentiments in others. He strengthens differences instead of minimizing them and that is very problematic,” said Posner-Körösi.

“Something has to be done so we don’t have another round of insulting and anti-Semitic statements. Enough is enough.”

Posner-Körösi emphasized she is approaching the talks, scheduled for Monday, April 2nd with Löfven and Social Democrat party secretary Carin Jämtin, with an “open mind”.

“I’m going in to listen unconditionally and have an open dialogue. We’ll see what they say and let that lead us further,” she said.

While refusing to elaborate on what she and other Jewish community leaders may want to achieve by the talks, Posner-Körösi said she would welcome a face-to-face meeting with Reepalu, whom she has never met.

“No bullshit. I won’t tolerate it. I’m not a politician.”

On Friday, following the release of the letter from Sweden’s Jewish community leaders, Löfven issued a statement emphasizing the importance of relations between his party and the Jewish community.

“I can understand their reaction and I want to be clear. It’s never okay when our representatives are seen as being unclear when it comes to people’s equal value,” he said in a statement.

A spokesperson for Löfven confirmed for The Local that a meeting was scheduled for April 2nd but added that the Social Democrat head didn’t plan to comment further on the matter until after the meeting.

Attempts by The Local to reach Reepalu for comment were unsuccessful.