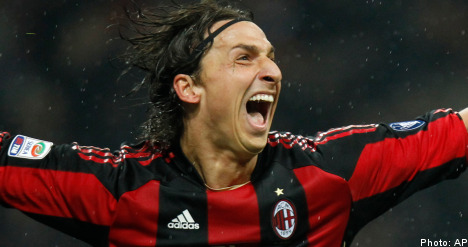 The big Swede spent one season at Barca, where he won the Spanish title, before allegedly falling out with coach Pep Guardiola.

He was sold to Milan where he became an instant hit, despite previous spells at their main rivals Inter Milan and Juventus.

“He’s a complete player — he’s good in the air, he can play on the floor, he can play with his back to goal and hold the ball up.

“We’ll have to be very concentrated so we don’t make any mistakes or leave space when he has the ball.

“It’s a pleasure to play against him as he’s one of the best players in the world right now. It was a pleasure to have him at Barcelona and he contributed to our success.

“We will do everything to ensure he doesn’t play well or score but it’s not just our defence but the whole team that will have to play well to contain him.”

The two sides met in the group stage, with Ibrahimovic injured for the 2-2 draw at Camp Nou and a scorer in the blaugrana’s 3-2 success at San Siro.

Ahead of Wednesday’s match, he said that Milan’s players need to do the club’s proud history justice and remember who they play for.

“We have to play like Milan, which means attacking, I don’t like playing tactically at home,” said Ibrahimovic, the top scorer in Serie A this season.

“We need to score and prepare for a good return leg. They have an idea of how to play and they always follow it.

“It’s an important game for everyone, tradition says Milan have always done well in the Champions League and this story needs to continue.”

According to Pique, having played against each other already this season is both an advantage and a disadvantage.

“It will be more difficult because of knowing each other better, because each will know how to attack and defend against the other.

“We’ll just try to impose our style and score goals, which is very important in the Champions League.”