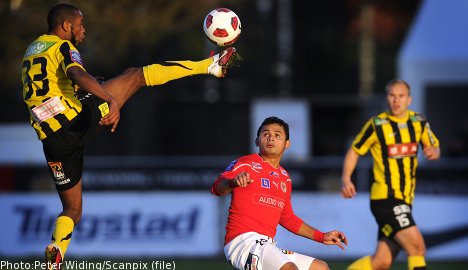 For non-Swedes, especially those who come from traditional football powerhouses such as England, Spain or Germany, the standard of Swedish domestic football can be depressing. But as I stress every year, the Allsvenskan is one of the most open and competitive competitions in Europe.

In stark contrast to so many other leagues, no one team dominates, and its been nearly a decade since a reigning champion has been able to defend their title. With at least five teams harbouring realistic expectations of challenging for SM Guld, 2012 will be no different.

Most of the new recruits might be past their peak, but at this level, they represent good signings, and form a nucleus of a brand new team. Generally, when Swedish teams do go on a spending spree like this, it gets results – firstly a league title, quickly followed by bankruptcy.

Elfsborg has been the most consistent team in Sweden of late, finishing in the top four for the past six seasons. Yet in that time they’ve only won one league title, in 2006. They have a strong squad with some talented players, and not surprisingly they once again start the season as one of the favourites. In the past their downfall has been their inconsistency and inability to finish games off, but with a new manager, maybe that’s all about to change?

The standout side in 2011 was Helsingborg, who led the Allsvenskan for almost the entire season, and managed to clinch the title with games in hand. Not many pundits expect them to defend their title since they lost a number of key players in midseason. However in the second half of the year, they still fielded a strong and consistent side, and they’re not likely to drop many points in 2012 either.

Another contender, and my personal tip, is Malmö FF. The 2010 champions were hampered by injuries and a change of manager in 2011, but had returned to form by end of the season.

They still have some good young players in their squad – such as Ivo Pekalski, Jimmy Durmaz, Jiloan Hamad and Daniel Larsson – who will lift Malmö if they can regain their 2010 form.

And finally AIK is a potential dark horse. There were times in 2011 when they looked unbeatable, and were one of the few sides to outplay Helsingborg.

They have a good solid backline, and if new signing Celso Borges can fill the big empty space left by Mohamad and Teteh Bangura, they’ll once again be hovering around the top of the table.

The competition at the bottom of the table is likely to be as intense as that at the top, with six teams who will consider 2012 a good season if they manage to survive. Newly promoted Åtvidaberg FF and GIF Sundsvall are obvious candidates, along with IFK Norrköping and Syrianska, both of whom were only promoted in 2010, and Mjällby who were promoted in 2009.

However, I’m also sure that at least one of these sides will surprise everyone and push up the table. This time last year Gelfe were favourites to go down, but in the first half of the season, defied all expectations to maintain a top five position. Mjällby and Trelleborg did the same in 2010.

But Gelfe fell apart after the summer break, Trelleborg were relegated last season, and Mjällby spent most of 2011 in the drop zone.

Each of these six sides is basically made up of journeymen and obscure youngsters. For one of them, everything might come together nicely, but it’s anyone’s guess which one it will be.

That just leaves five more teams, who shouldn’t fear relegation but are not likely to challenge for the title either.

Örebro has made some steady progress over the past few seasons, but losing key players over the break has set them back, and will make it hard for them to push beyond mid-table.

Defying all expectations, Häcken now looks like an established top-flight side. Key to their success has been their ability to rejuvenate the careers of discards from other clubs. If they can do the same for new signing Andreas Drugge, after an unsuccessful stint at IFK Göteborg, then they can once again challenge for a European spot.

For Gais, 2011 was their highest finish for over twenty years, made even sweeter by the fact they beat archrivals IFK Göteborg.

Many Gaisare fear that 2012 can’t possibly be any better, but for as long as they can keep Wanderson (arguably the competition’s best player), they’re capable of beating anyone in the league. And if Mervan Celik returns after his brief stint at Glasgow Rangers, then they could even push for top four.

Kalmar continues their slow decline since winning the league in 2008, this time loosing Daniel Sobralense and Ricardo Santos. But their strong home record at their new stadium ensures they’ll be safe from relegation.

Djurgården has looked very average over the past few seasons, but manager Magnus Pehrsson has been busy over the winter break, building up a new team and rejuvenating his squad. His new singings aren’t as exciting as IFK Göteborg’s, but they should be good enough to survive in a comfortable mid-table position.

There is no escaping the fact that in terms of playing standards and financial muscle, Swedish clubs cannot compete with the rest of Europe.

Any Swedish club that qualifies for a European competition is likely to be knocked out before the end of August, and even the biggest clubs will struggle to keep their players once the transfer window opens up.

But it’s also these characteristics that keep the league so open and competitive.

Consequently making predictions is incredibly difficult. It’s so unpredictable that I wouldn’t be surprised if IFK Göteborg or Elfsborg end up mid-table, and Gelfe pushes into the top three.

I hope you keep this in mind when my predictions are inevitably proven misplaced. But as a regular follower of the Allsvenskan over the past six seasons, I wouldn’t want it any other way.