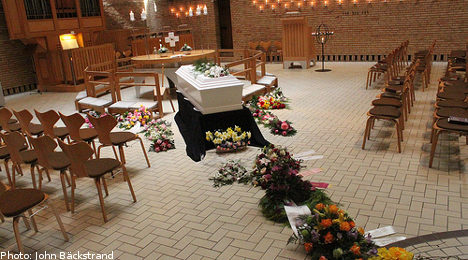 “I’m not taking it as seriously as others are, but there’s certainly been a mix-up,” the unnamed woman told the local Bohusläningen newpaper.

The letter was addressed to the “estate of the deceased” with the woman’s name on it. The letter asked for relatives to fill in the details concerning the woman’s address, to be returned to the Swedish Tax Agency (Skatteverket).

“It’s clearly shocking when one receives such a letter, but I knew that I certainly was alive, so I wasn’t especially worried about it,” she said to the paper.

“The person I spoke to said that I must be alive, as I was able to call. She promised to correct the details and write in that I was alive”.

A subsequent letter arrived from the agency stating that the morbid mix-up was due to a mistake by a doctor, who had written incorrect birth details a death certificate, resulting in the woman being declared dead on paper.

Relatives of the woman are allegedly angry and upset about the incident.

However, the woman’s problems don’t end at just having to correct the error.

The mistake has plagued her life – meaning that she is officially recorded as “dead” at any establishment with a record of her details.

When the 87-year-old recently needed to get medicine from the chemist, for example, she was denied her prescription as the chemist’s records stated that she was a “non-existing person”.

“She saw that I was standing there and that I had my proof of identity with me, so after a while I was allowed to get my medicine anyway. But it dragged out a good while,” the woman said.

She has also been forced to contact the social insurance agency and her bank to make sure her pension keeps coming in.

The most pressing question for the woman now, according to the paper, is a moral brainteaser.

Will she need to declare her taxes?