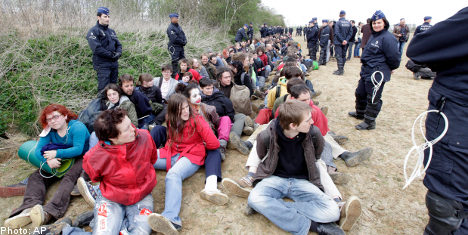 “The point was to stop and disrupt NATO’s operations and highlight that Sweden is a part of NATO operations,” 22-year-old activist Puma Berg told the Expressen newspaper.

Berg was among 26 Swedes arrested on Sunday afternoon when close to 500 activists attempted to make their way into NATO headquarters.

More than 200 protesters were arrested, although there were conflicting reports about exactly how many peace activists were detained by police.

“I heard 360 were arrested, 30 of whom were from Sweden and 30 from Finland,” Berg told Expressen, adding that 16 activists actually managed to penetrate the grounds of NATO headquarters.

Belgian police, however, claimed that no demonstrators made it onto NATO grounds.

Most of the Swedes arrested in Sunday’s action were released later in the evening.

“We were arrested around 2.40pm and released around 10pm,” Pelle Sunvisson of Swedish peace activist network Ofog told the Dagens Nyheter (DN) newspaper.

According to Ofog’s website, 26 Swedes were among those arrested.

The demonstration, organized by the Belgian association Action for Peace was organized to protest the alliance’s actions in Afghanistan and Libya as well as nuclear arms.

“We want to highlight at NATO has and is developing nuclear weapons and they are ready to use nuclear weapons in an attack which is a violation of international law,” Berg told Expressen.