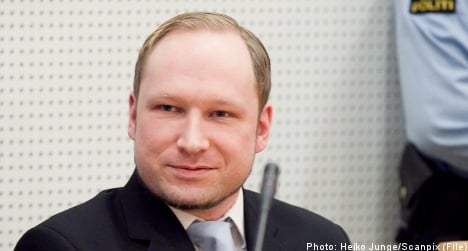 Värmland’s proximity to Oslo has led Norwegian police to suspect the house was to be used as a secret base for terrorist operations, including the manufacture of explosives.

In the emails, Breivik specifically requested an “abandoned farmhouse” which was “isolated or desolate”, explaining that he planned to spend a year or two writing a book about the stock market.

But Breivik’s country house plans never came to fruition, despite him receiving one response from Christina Öster, an estate agent who said she had found a house that met with Breivik’s specifications.

Öster said she had endeavoured to help despite being baffled as to why a writer would ask for a house “without electricity or running water”. She eventually offered him a house near Koppom, but is now shocked at her brush with Breivik, who killed 77 people in his attacks on July 22nd 2011.

“What if he had made bombs here in Koppom, what damage they could have done,” Öster told the Aftonbladet newspaper.

Breivik eventually chose a farmhouse in Åsta, in Hedmark, Norway, some 25 kilometres from the Swedish border.

Police suspect it was there he made the explosives that claimed eight lives in a car bomb attack in Norway’s capital in July. Breivik then gunned down a further 69 mostly young people at a political summer camp on the island of Utøya.

His trial begins in Oslo on April 16th.