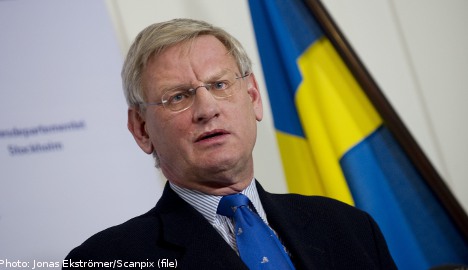 “It isn’t as if the world is lacking in anti-tank missiles. Would the situation in the world be better if they had bought French manufactured ones instead?” Bildt said during a press conference on Tuesday.

According to Bildt, he was not consulted by the Swedish Agency for Non-proliferation and Export Controls (Inspektionen för strategiska produkter, ISP) regarding the Saudi deal.

“These are not government-level decisions and that’s how it should be. We have independent agencies. If it is sensitive and in a grey area, ISP will consult me, but they haven’t on this occasion,” he told DI.

Bildt also said that he felt the Saudi deal had been handled “correctly” and that he didn’t have anything to say on the conduct of Sweden’s Defence Research Agency (Totalförsvarets forskningsinstitut, FOI), which is currently the subject of a criminal probe into secret plans by FOI to help the Saudis build a weapons plant.

As FOI’s plans to provide assistance with the construction of the factory were considered to be on the border of what the agency had the right to do, a shell company, SSTI, was set up by an FOI official with cash borrowed from Sweden’s military intelligence agency, MUST, in order hide Swedish involvement in project, dubbed Project Simoom.

In commenting on the ongoing scandal, which contributed to the resignation last week of defence minister Sten Tolgfors, Bildt also said he would not have stopped the deal, had he known of it.

Sweden’s relations with Saudi Arabia are good and it is important to stay on good terms with the regime, which he referred to as a “family business”, according to DI.

“I see prince Turki quite regularly,” he told the paper.

However, 2010 report from the foreign ministry describes the situation in Saudi Arabia as lacking on many counts.

According to the report, there is widespread discrimination against women, which is supported by the country’s legislation.

The report also criticizes the lack of law and order, the occurrence of public executions as well as capital punishment for children.